As in the previous year, February is the time for ski vacation or… as the Bear said, Winterurlaub! The destination is exactly the same, Horní Blatná in Czech Republic, and we stayed in the same green house called Pension Florian.

The house remained the same, except that… now there’s WiFi! 😀 I still can’t decide whether that is good or not. Last year I felt so happy and relaxed during the vacation because I wasn’t bothered by emails or (bad) news or friend’s updates in social media. Sometimes we need to get away from such things to fully enjoy the holiday. However, one thing that makes me grateful that the WiFi exists is that I wouldn’t miss the latest episodes from one K-drama I’m following :p.

The other thing that is not the same as last year is… there’s no snow! 🙁 Well, there was some, but too little for skiing. So yeah, no skiing at all, but we did some hiking and trip to nearby towns, like Johanngeorgenstadt *which is already in Germany*, Nejdek and Karlovy Vary, which are wonderful! Prague is not the only beautiful city in Czech Republic ;). These towns are mining towns located in the Ore mountains, a mountain range that forms a natural border between Saxony (Germany) and Bohemia (Czech Republic).

Nejdek is a little town, with cute little shops along the promenade(?) starting from the Catholic church St. Martin *which was closed when we’re there* until the town-square. Since there’s not so much to see in the town, we went up a nearby hill, which is also a Kreuzweg, a.k.a Stations of the Cross. And the view of the town from the hill *there’s a viewpoint called Rajmanova vyhlídka* is really great… as shown in the following picture. I love it!

According to the Bear’s family, it is a place for rich Russian tourists to do their shopping :). There are a lot of shops selling porcelain decorated in Russian style, the infamous Bohemian crystal, and fur coat. The shop signs include also Russian and German, besides Czech language.

Karlovy Vary is also a spa city historically famous for its hot springs. The hot mineral springs are everywhere in the city, which are used to treat illnesses affecting the digestive system and metabolism disorders, along with problems linked to cancers and the motor apparatus (joints, brittle bones). When I heard the term a ‘spa city’ I expected that the hot mineral water is used for bathing only, so I was quite surprised that they also drink the water.

Everywhere in the street we could see people carrying special ‘funny’ cups for drinking the special water. I saw a boy carrying a cup that looks like a toilet ^^. The water is quite hot, up to 72°C, and salty. I tried just a bit, not quite my taste I would say.

I really love walking around in this city, because the buildings are just amazingly beautiful, with delicate details of the ornaments that captivate me. 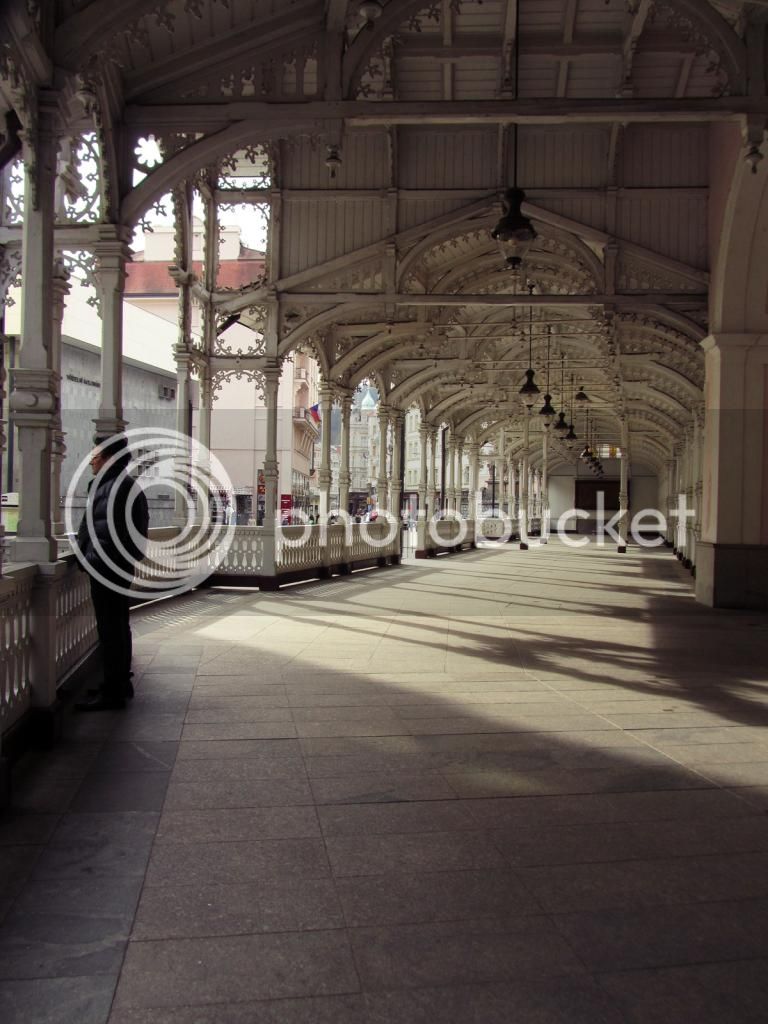 One of them is a luxury hotel, Grandhotel Pupp, that annually hosts the Karlovy Vary International Film Festival. It was used as a movie set for James Bond’s movie, Casino Royale. All in all, a very nice city to visit!