First of all, for you who celebrate the birthdays of two prophets, which fall on two consecutive days this year, Merry Mawlid al-Nabi and Merry Christmas! 🙂 Have a nice long weekend, and since probably you’ll have a nice long holiday until the New Year, happy holidays!

Next, since today, December 25th, *I wrote this draft two days ago* is also my birthday… happy birthday to me! Now it’s only one more year to 30 😉 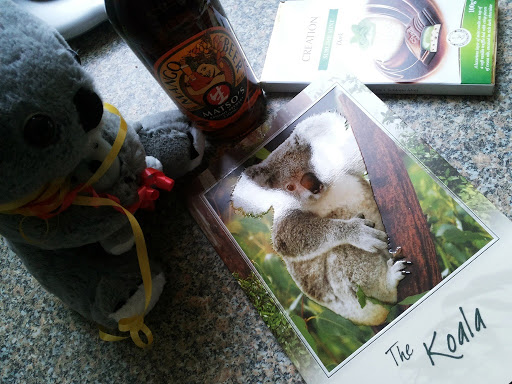 So thankful for all the presents *for Christmas or for birthday I regard them all as my birthday presents ;)*, although ♫ all I want for Christmas is you ♫ ehem, like more colors to accommodate my new hobby, interesting jigsaw puzzle and books, candle holder decorated with cats, etc.

The picture above contains my birthday presents from the bear, typical Australian stuff since he’s just back from Brisbane *after 2.5 months*. The fluffy Kolala, the very left on the picture, hugging her baby, is actually a reward for the cat being self-restrained on browsing social media and (especially negative) news; the baby kolala is a reward for the cat being (so unusually) sportive *e.g. completing at least 5,000 steps a day* while the bear is away :”>. The mango beer and chocolate are simply because I love mango and chocolate. The last item is actually an audio card. The sound of conversation between mama koala and baby koala can be heard when the card is opened. Anyway, what is inside the card is what is so great and has an interesting background story…

One day in October, out of nowhere, the bear suddenly asked me a question: “Where do you prefer to do sightseeing, Munich, Milan or Paris?” I initially chose Paris, but he said it is expensive, so then I chose Munich, and said that I would like to visit the Disney castle :p. “But… for when?” I asked. He answered with an exact date: March 31st until April 2nd/3rd. Suddenly everything for the trip is set. I was surprised that it’s decided so quickly, and one-sided-ly, but… well, I don’t mind, quite happy actually ^^. I think I would’ve finished my thesis by then…. I hope.

Another day *I couldn’t find the chat in the archive, must be in one of the Skype calls, so I don’t know exactly when*, again out of nowhere, he suddenly commented on the newest album of Muse, Drones. It’s a bit surprising because he doesn’t usually listen to Muse, and I didn’t know that they have a new album. I listened to one or two songs from the album and at first I don’t quite like the songs. But then I downloaded *I actually bought from Amazon :D* the full album, listened to it almost all the time, and somehow became addicted to it. I started looking for their tour dates, and guess what… there is one in Munich on March 31st!

I excitedly called the bear, but then we checked the ticket website and unluckily the standing tickets around the stage (it will be in the middle of the arena and ‘will give fans a true 360 degree audio/visual sensory experience’) are sold out :(. He said, “Hmm, too bad, maybe next time” :((( We checked other cities, the standing tickets are either sold out or too expensive, and we don’t really want to enjoy a live concert from our seats.

So… I gave up the idea. Even though it is actually my wish to see Muse for our next live concert, and it would be a perfect closure for my thesis writing. Moreover, the timing is so strangely perfect, since our trip to Munich is already decided. Oh well, life must go on, I thought.

However, I secretly wished that the chosen date for our trip to Munich is not a coincidence ;). That’s why when I opened one of my Christmas presents from the bear on the Christmas eve, titled “a coupon for a cultural trip to Bavaria”, I was a bit disappointed that there is no ‘Muse concert’ in the agenda. But the trip is very well-planned, including a ‘breakfast in Katzentempel‘ and of course the Disney castle :D, so I’m still very looking forward to the trip.

The next morning, on my birthday, he presented me those presents in the above picture. When I opened the Koala card… 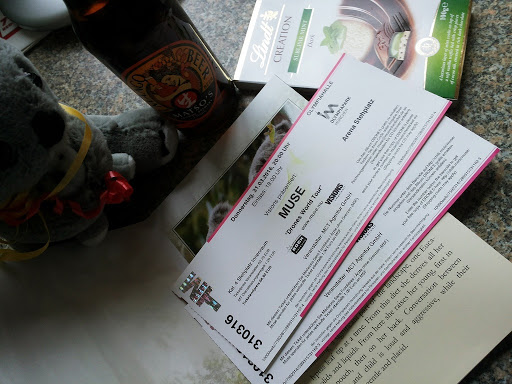 p.s.: The bear was sooo good in keeping this a secret until the end. Even though the ‘detective’ cat was so sharp in catching some hints and ‘coincidence’, hoho, the bear’s act right until the morning of my birthday convinced the cat that there is no concert, hence, the cat’s super excited reaction when seeing the tickets! 😀

One thought on “Happy Birthday(s) and Happy Holidays!”