The festival happened around two weeks after Singapore celebrates its golden jubilee, August 21-22 and 28-29. Actually, I found out about this festival accidentally, I’m so glad I didn’t miss it :).

After the ‘cat & bear’s trip to Tioman Island, Malaysia’ (will write about this soon), we arrived back in Singapore on Monday, August 24 evening. On our way to the nearest 7 Eleven to have our dinner, ehem… ’cause I was craving steamy ramen cup :D, we met these cute little fellas in front of National Museum of Singapore..

They’re so cute! I can’t stop moving my body when they start dancing 🙂

We got a booklet about the festival from a guy hanging around there, that’s how we found out about this. The big events happened only on Friday and Saturday (21-22 and 28-29), but the Anooki, the cute Inuits, celebrates SG50 at the Façade of National Museum of Singapore throughout the week, continuously (with 3 min break each time) from 7:30 PM to 11:00 PM, along with the free exhibitions inside (and outside) the museum. Lucky us!

The bear wasn’t so lucky, because we missed the first weekend of events, and he had to leave Singapore on Tuesday night, August 24. Bummer 🙁 Well, at least he met the Anooki. But… my sister was indeed very lucky, because she visited me the weekend after, August 28-31. What a perfect timing! Even though we didn’t know about the festival beforehand. 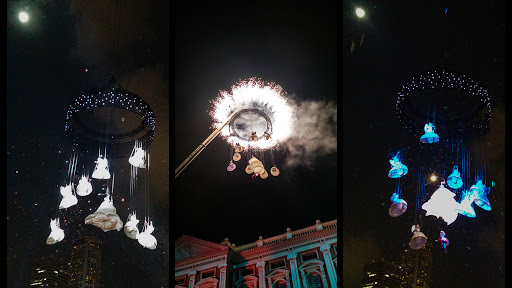 We watched a very cool show titled ‘Garden of Angels’ by Theater Tol from Belgium. It was enchanting, like real angels dancing in the moonlight (yeah, it was full moon!). We recorded some videos of the performance, but… I’m too lazy to (prepare and) upload them :p. So here you go, a video I found in Youtube, with better quality than ours :p

Before the angels were up in the sky, the show started with some musical performances, specifically opera arias. There was this one song, that is sooo familiar to us, but we don’t know why and from where we get the tune. Could be from anywhere, but we guess either from movies or… Pavarotti’s albums that were played excessively at our home some time in the past.

We browse and browse, with keywords like ‘popular opera song’ or ‘famous Italian opera arias’, we were quite sure it’s Italian. It took us a while, but we couldn’t stop until we solve the mystery! Then finally, we found it after I sang the tune to a song-searching app 😀

I’ll put this here just in case this happen again and it bugs me not to know what song it is. Because I have this deja vu feeling that I did look for this song already ^^;. “O mio babbino caro” from the opera Gianni Schicchi by Puccini.